Sterling fall broadly today after much worse than expected PMI data raises concerns of recession ahead. On the other hand, Euro jumps as ECB officials continued to talk up July rate hike, while PMI data were solid. Still, the best performer today so far is Yen, which is supported by receding risk-on sentiment. Dollar is also trying to regain some ground. For the same reason, Aussie and Kiwi are turning softer.

Technically, it looks like Euro and Sterling are diverging, which is in-line with the broader case that EUR/GBP is in medium term reversal. Immediate focus is now on 0.8617 resistance in the cross. Firm break there will extend the rebound from 0.8210 to 38.2% retracement of 0.9499 to 0.8201 at 0.8697. This level will be crucial in determining the underlying momentum in EUR/GBP. 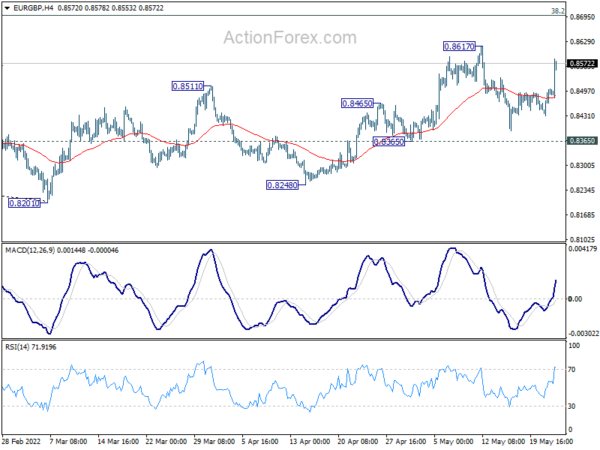 “The UK PMI survey data signal a severe slowing in the rate of economic growth in May, with forward-looking indicators hinting that worse is to come. Meanwhile, the inflation picture has worsened as the rate of increase of companies’ costs hit yet another all-time high. The survey data therefore point to the economy almost grinding to a halt as inflationary pressure rises to unprecedented levels.

“The tailwind from the reopening of the economy has faded, having been overcome by headwinds of soaring prices, supply delays, labour shortages and increasingly gloomy prospects. Companies cite increasingly cautious moods among households and business customers, linked to the cost-of-living crisis, Brexit, rising interest rates, China’s lockdowns and the war in Ukraine.

“There are some signs that the rate of inflation could soon peak, with companies reporting price resistance from customers, and it is likely that the slowing in demand will help pull prices down in coming months. However, the latest data indicate a heightened risk of the economy falling into recession as the Bank of England fights to control inflation.”

ECB Lagarde: We’re moving very likely into positive at the end of Q3

“When you’re out of negative (rates) you can be at zero, you can be slightly above zero. This is something that we will determine on the basis of our projections and … forward guidance,” she explained.

Still, Lagarde emphasized the graduality and ECB’s policy adjustments. “I don’t think we are in a situation of surging demand at the moment,” Lagarde said. “It’s definitely an inflation that is driven by the supply side of the economy.”

Separately, Governing Council member Francois Villeroy de Galhau, said that “a 50 basis-point hike is not part of the consensus at this point, I am clear… Interest rate hikes will be gradual.”

On the other hand, another Governing Council member Robert Holzmann said that a 50bps rate hike in July would be appropriate, and ending the year with positive rate is extremely important.

“The eurozone economy retained encouragingly resilient growth in May, as a beleaguered manufacturing sector was offset by a buoyant service sector…. Thanks to buoyant demand for services, particularly from households, the PMI data are consistent with the economy growing at a solid quarterly rate of 0.6% so far in the second quarter….

“Although there are signs that inflationary pressures could be peaking, with input cost inflation down for a second successive month and supply constraints starting to be less widely reported, inflationary pressures remain elevated at previously unprecedented levels. Such high price pressures, accompanied by the reassuringly resilient GDP growth signalled by the surveys, looks set to tilt policymakers at the ECB towards a more hawkish stance.”

Japan PMI manufacturing dropped to 53.2 in May, services rose to 51.7

“”Private sector firms reported that the reduced impact of COVID-19 had lifted services activity, most notably in the tourism sector as pandemic-related restrictions were eased further. That said, the renewed introduction of lockdown measures across China and economic sanctions placed on Russia amid the Ukraine war had exacerbated supply chain disruptions, with greater reports of material shortages and severe delivery delays.

“As a result, there was a further intensification in price pressures across the private sector, as firms reported series-record rises in both input and output prices. Moreover, uncertainty regarding the outlook for price and supply conditions dampened business confidence, which was at its softest since August 2021.”

“The expansion of the Australian economy continued in May at a solid pace… Although manufacturing output was affected by issues of COVID-19 disruptions and poor weather conditions, manufacturing demand remained robust, which had been a reassuring sign.

“Persistent supply chain constraints continue to pose challenges for firms in the private sector, both in terms of input acquisition and price fluctuations. Anecdotal evidence also suggested that firms are concerned with the rising interest rate outlook and the effect on their businesses, all of which are worth monitoring moving ahead.”

GBP/USD is staying in range of 1.2329/2637 and intraday bias remains neutral at this point. Considering bullish convergence condition in 4 hour MACD, break of 1.2637 will confirm short term bottoming at 1.2154. Intraday bias will be turned back to the upside for 55 day EMA (now at 1.2775). On the downside, below 1.2329 minor support will retain near term bearishness and bring retest of 1.2154 first. Break there will resume larger down trend from 1.4248. 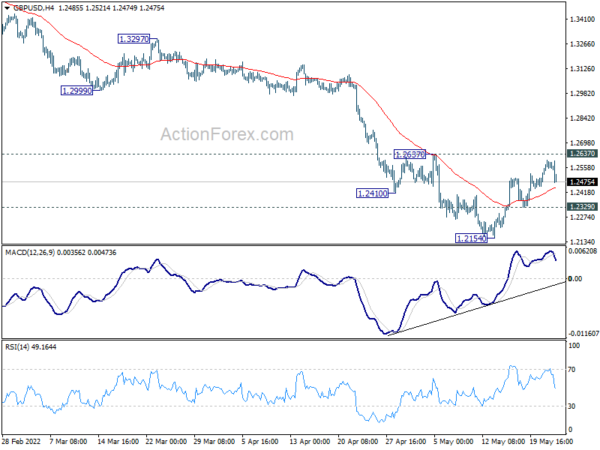 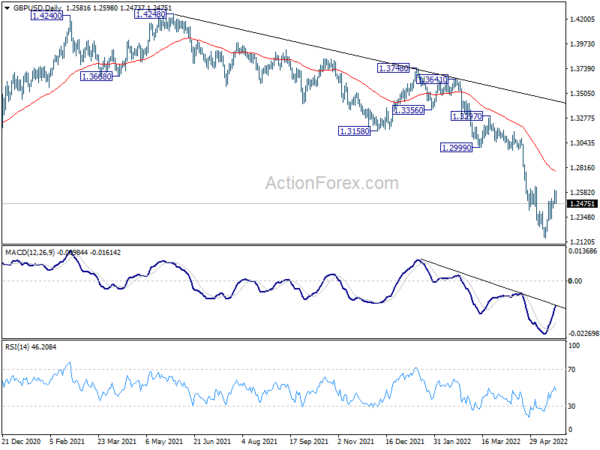 Stocks recovering after dipping into negative territory
EUR/GBP Price Analysis: Stays below 0.8600 despite an upbeat mood and a weaker GBP
‘Smear campaign’: Nexo responds to accusations of stealing donations, siphoning funds from charity
Macron overheard at G7: Saudi Arabia and UAE barely have any spare oil capacity
Commodity currencies are technically vulnerable to another flush