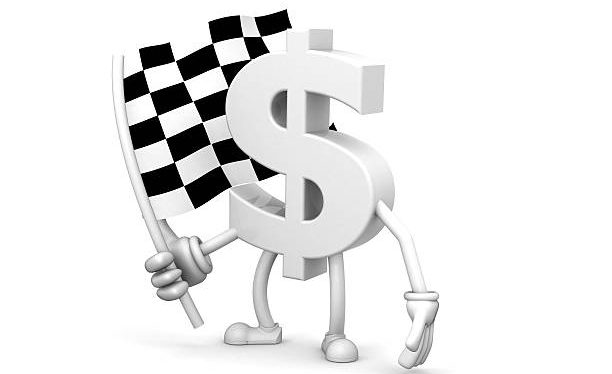 The markets are trading in consolidative mode in Asia today. Dollar attempted to resume near term rally against Euro overnight, but quickly lost momentum. While Yen remains generally weak, selloff slowed, along with slight retreat in US 10-year yield, and retreat in stocks. Traders will turn their focuses firstly to UK GDP in European session, and then US CPI and FOMC minutes later in the day.

Technically, we’d put some attention to the interplay between Dollar, Euro and Sterling today. EUR/GBP turned sideway after hitting 0.8471 but recovery has been weak and more downside is in favor. Break of 0.8471 will resume the fall from 0.8656 towards 0.8448 low. That might help lift GBP/USD through 1.3672 temporary top to resume the rebound from 1.3410. Also, such development could help cap EUR/USD’s recovery below 1.1639 minor resistance. Let’s see how it goes. 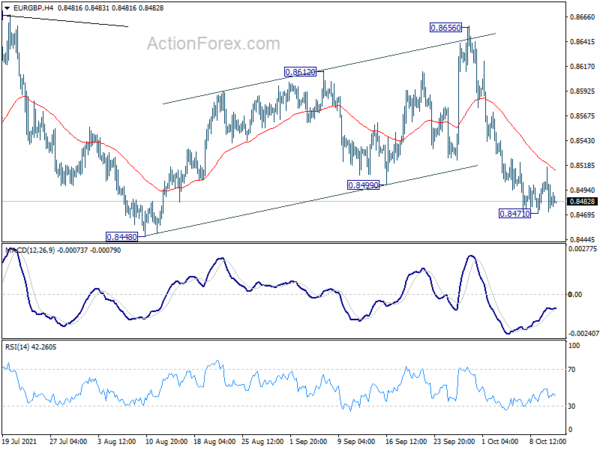 St. Louis Federal Reserve President James Bullard told CNBC, “I’d support starting the taper in November.” He added,  “I’ve been advocating trying to get finished with the taper process by the end of the first quarter next year because I want to be in a position to react to possible upside risks to inflation next year as we try to move out of this pandemic.”

But he also emphasized “there’s no reason for us to commit one way or another at this point,” regarding interest rate hike. “I just want to be in a position in case we have to move sooner that we’re able to do so next year in the spring or summer if we have to do so.”

He noted that a supply shock alone cannot cause inflation”. But, “a supply shock being accommodated by very easy monetary policy, it’s those two things that lead to the inflation.” Yet, he’s not concerned with the risk of a 1970s-style stagflation since “the probability of recession is exceptionally low at this point.”

Separately, Atlanta Fed President Raphael Bostic said the job markets had made “sufficient” gains to allow tapering the USD 120B per month asset purchases. He “would be comfortable starting tapering of asset purchase programme in November.” Nevertheless, he noted that “there is significant uncertainty about how long inflationary pressures will last.”

Westpac expects RBA to “almost certainly maintain its policy settings” at November 2 meeting. Instead, the next change is likely to be another round of tapering in February. Looking forward, Westpac expects a rate hike in Q2 of 2023, while RBA has repeated said the conditions of hike won’t be met until 2024.

ANZ said the survey is telling a story of “remarkable resilience”, with most forward-looking activity indicators holding up or improving. Inflation pressures remain “intense” and cost pressures are “extreme”.

Intraday bias in EUR/USD is mildly on the downside with breach of 1.1528 temporary low. Current decline from 1.2265 would target 1.1289 medium term fibonacci level next. On the upside, break of 1.1639 resistance, however, will indicate short term bottoming. intraday bias will be turned back to the upside for stronger rebound. 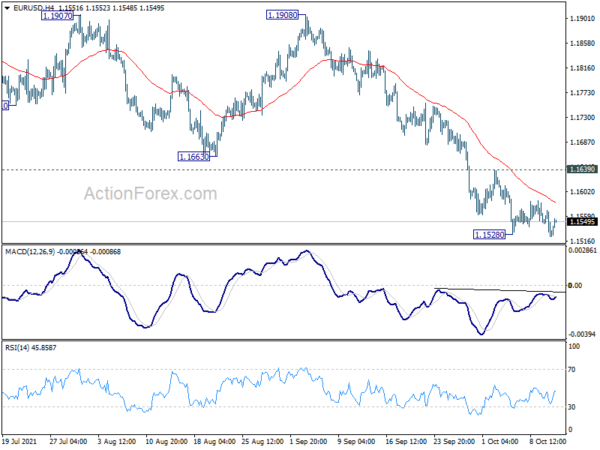 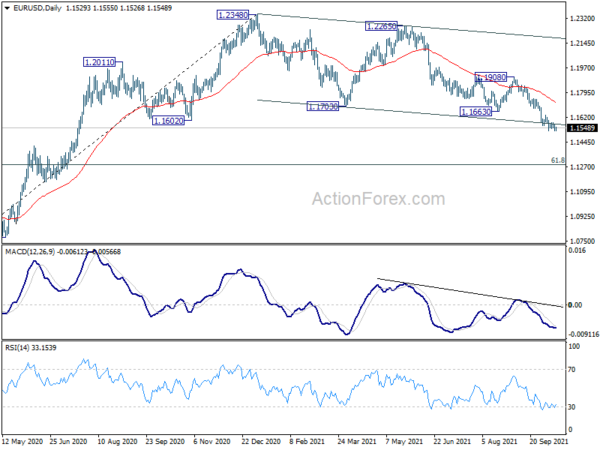 The AUD is the strongest and the CAD is the weakest as the NA session begins
EUR/USD: A weekly close above 1.0580 will be technically bullish – Scotiabank
Rent the Runway shares surge after fashion rental company reports stronger quarterly sales
Is there more to the jobs picture? The household survey has been flat since March
Sugar stocks jump up to 10% on reports of 7% drop in sugar output