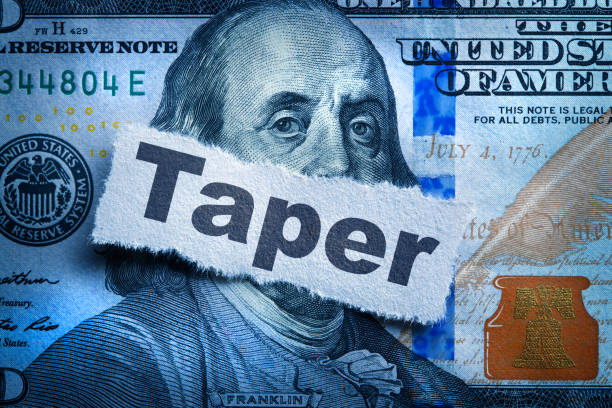 The Fed turned more hawkish in September, with the first rate hike pushed forward to 2022. Fed Chair Jerome Powell indicated that QE tapering will come “soon”. The staff downgraded the GDP growth forecast for this year, but revised higher that for 2022 and 2023. Inflation projections were revised higher all the way through to 2023, although its strength was still described as transitory. All monetary policy measures stayed unchanged. The Fed funds rate was left at 0-0.25% and the QE program at 120B.

In the policy statement, the Fed acknowledged improvement of economic activities as driven by vaccination and policy support. It also noted improvement of sectors that have been “most adversely affected by the pandemic|. Yet, it warned that the recovery has been slowed by “rise in COVID-19 cases”. It also reiterated that view that the path of the economy is dependent on the developments of pandemic. 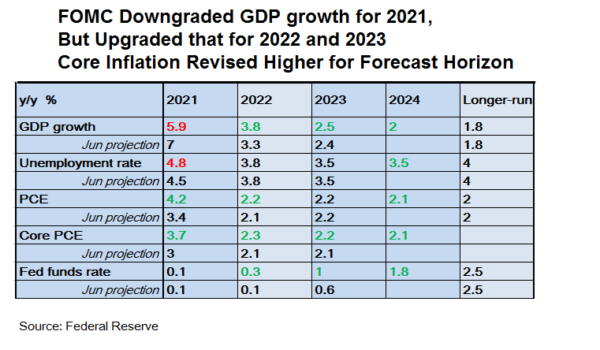 On the monetary policy outlook, policymakers noted that the economy has made progress toward the central bank’s goals. They suggested that “a moderation in the pace of asset purchases may soon be warranted”, if the “progress continues broadly as expected”. This sounds more hawkish than the July’s reference which affirmed that the members would continue to assess the progress in coming meetings. Together with the forward guidance made at the Jackson Hole symposium that a tapering could happen by “year-end”, it is highly likely that a formal announcement should some at the next meeting (November) with implementation starting in December. We expect the Fed will lower purchases of Treasury and MBS by 10B and 5B, respectively, each month, until the program ends in about July 2022.

Members have also pushed forward the timing of the first rate hike. The median dot plots showed that 9 out of 18 members projected it to happen in 2022. Indeed, the staff projection also showed that the policy rate would increase to 0.3% next year, up from the current 0.1%. This would be followed by further increase to 1% in 2023 and 1.8% in 2024. The longer-term policy rate will stay at 2.5%. If the QE tapering process completes as we have expected, the first rate hike could come in September 2022. 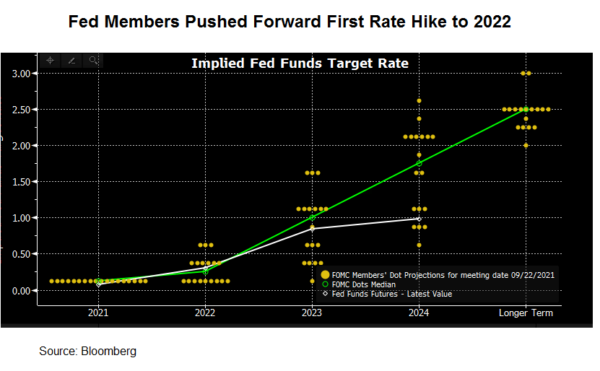 Here’s where the jobs are for July 2022 — in one chart
Food prices fell sharply in July — but the respite may not last
Yen Stays Weak in Quiet Markets, US CPI to Move the Markets This Week
Outside day sets up in Ethereum as it breaks $1800 in 9% rally
Gold rate : Yellow metal holds steady; silver tops Rs 58,500