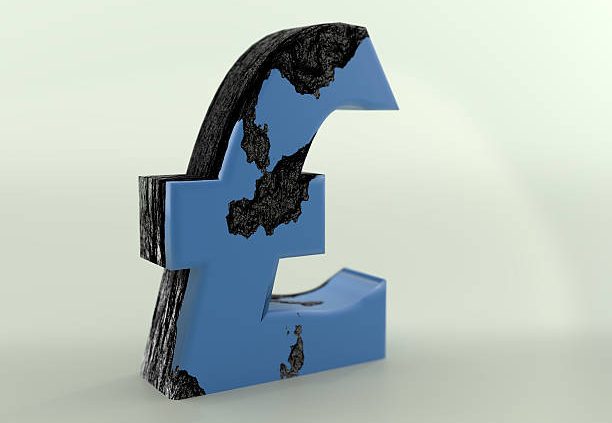 Risk sentiment appears to have stabilized in Asia a bit. The steep fall in Nikkei was just a post-holiday catch up. Yen and Swiss Franc are digesting gains but remain the strongest for the week. Sterling is indeed the worst performing so far, worse than even commodity currencies. Selling in European crosses is clearly weighing on the Pound. Overall, the markets could turn cautious for today, as bigger risk of FOMC meeting just lies ahead on Wednesday.

Technically, EUR/GBP’s rebound suggests that pull back from 0.8612 has completed. It might be ready to resume the rise from 0.8448, subject to reaction to 0.8612 resistance. At the same time, GBP/CHF is pressing 1.2656 support. Sustained break there should indicate that rise from 1.2467 has completed after rejection by 1.2790 near term structural resistance. In this case, GBP/CHF would target a test on 1.2467 support. That, together with break of 0.8612 resistance in EUR/GBP, could confirm return to weakness in Sterling in general. 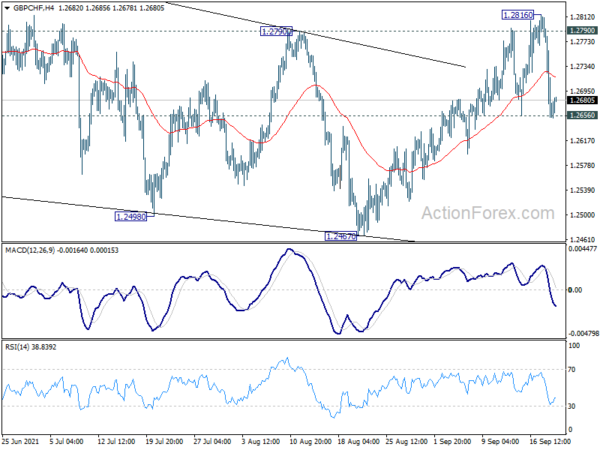 The selloff in US stocks overnight was a rather bearish development for the near term. S&P 500 gapped below 55 day EMA, and dive through medium term channel support without much hesitation. While it managed to pare back some losses to close at 4357.73, it’s capped below 4367.73 structural support. 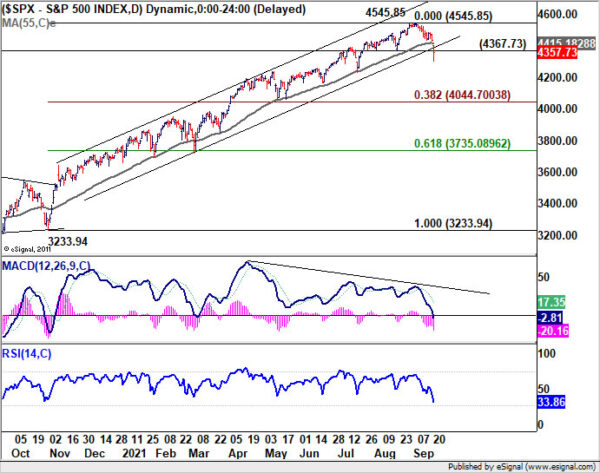 RBA Minutes: Economy expected to bounce back as vaccination rates increase and restrictions are eased

In the minutes of the September 7 RBA meeting, it’s noted, “the outbreak of the Delta variant had delayed, but not derailed, the recovery.” The economy was “expected to bounce back as vaccination rates increase and restrictions are eased” but “there was considerable uncertainty about the timing and pace of the recovery, which was likely to be slower than experienced earlier in 2021”. In the central scenario, growth will return in Q4 and its “pre-Delta path in the second half of 2022”.

As a result of the delay in recovery and uncertainty about the future, “progress towards the Bank’s goals was likely to take longer and was less assured”. But at the same time, fiscal policy is “more appropriate” in dealing with a “temporary and sharp reduction in private sector incomes”. Hence, RBA decided to taper purchases to AUD 4B per week, but extend the period to mid February 2022.

RBA also reiterated its commitment to “maintaining highly supportive monetary conditions to achieve a return to full employment in Australia and inflation consistent with the target.” And it will not raise interest rate until 2024.

He reiterated that in the latest Monetary Policy Statement, it’s noted RBNZ had “more confidence that employment was already at its maximum sustainable level and that pressures on capacity would feed through into more persistent inflation pressures over the medium-term”.

Thus, the “least regrets policy stance” was to “further reduce the level of monetary stimulus so as to anchor inflation expectations and continue to contribute to maximum sustainable employment.” Also, ” whether or not a monetary policy response would be required in response to future health related lockdowns would depend on whether there was a more enduring impact on inflation and employment”

Intraday bias in GBP/USD remains on the downside as fall from 1.3912 in in progress. Larger decline form 1.4248 is likely resuming and break of 1.3570 will target 1.3482 key support level. Sustained break there will carry larger bearish implication and target 1.3163 fibonacci level. On the upside, above 1.3714 minor resistance will turn intraday bias neutral again first. 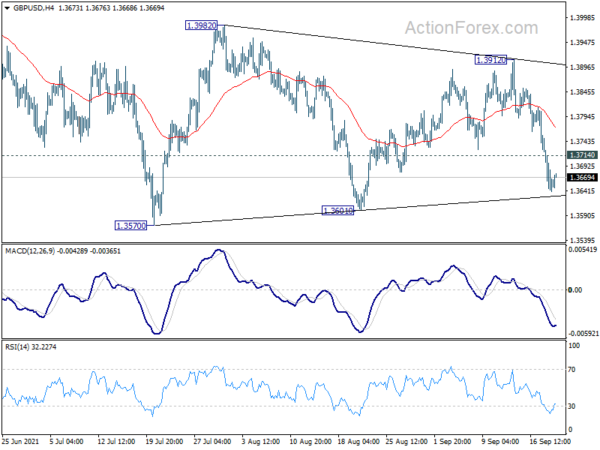 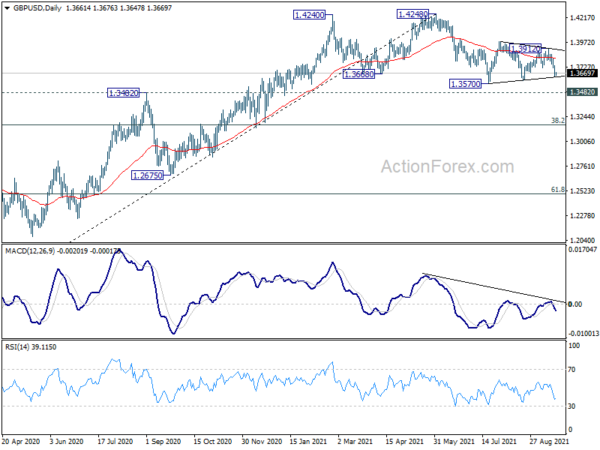 Food prices fell sharply in July — but the respite may not last
Gold eases as investors focus on U.S. inflation data
Sterling Falls Broadly after GDP, Dollar Paring Losses
Wholesale inflation fell 0.5% in July, in another sign that price increases are slowing
EURGBP erases gains and returns to a familiar bias defining level