Coming into New York trade the market mood was fairly neutral. There were some concerns about China/Evergrande but the moves in FX were small.

However once again the equity tail was wagging the dog. After a flat start, US equities slumped had at the open for the eighth time in the past 10 trading days. The dip buyers tried to step in at the European close but after a fledgling rally there was another round of selling.

With the dip in equities came a broad bid in the US dollar, even against CHF and JPY. It wasn’t exactly a risk off trade in bonds either as rates pushed close to the Sept/Aug highs before stalling.

The Canadian dollar was hit on falling energy prices and the mood in equities, along with some concerns about Monday’s Canadian election. USD/CAD cut through 1.2700 easily to break the weekly high then cruised up to 1.2760.

It was quadruple witching on Friday and one thing that argues that flows were responsible for price action is the outperformance of AUD and NZD versus CAD. If Evergrande was truly a driver, you would expect to see that antipodeans struggling more, especially the way that iron ore is trading.

Cable finished poorly on Thursday and Friday after hitting a one-month high early in the week. The selling was steady but didn’t kick off until well into New York trade. It’s on track to finish at the lows of the day as well. The Sept low of 1.3726 is now a hiccup away.

The chart I’m most interested in at the moment is USD/CHF. Despite the mood today, it extended the breakout above the June highs to the best levels since April. Many pairs are stuck in ranges but this one is making a move. There have been signs of SNB intervention recently but this is part of a broader USD move. Could the market be sniffing out a surprise taper announcement? 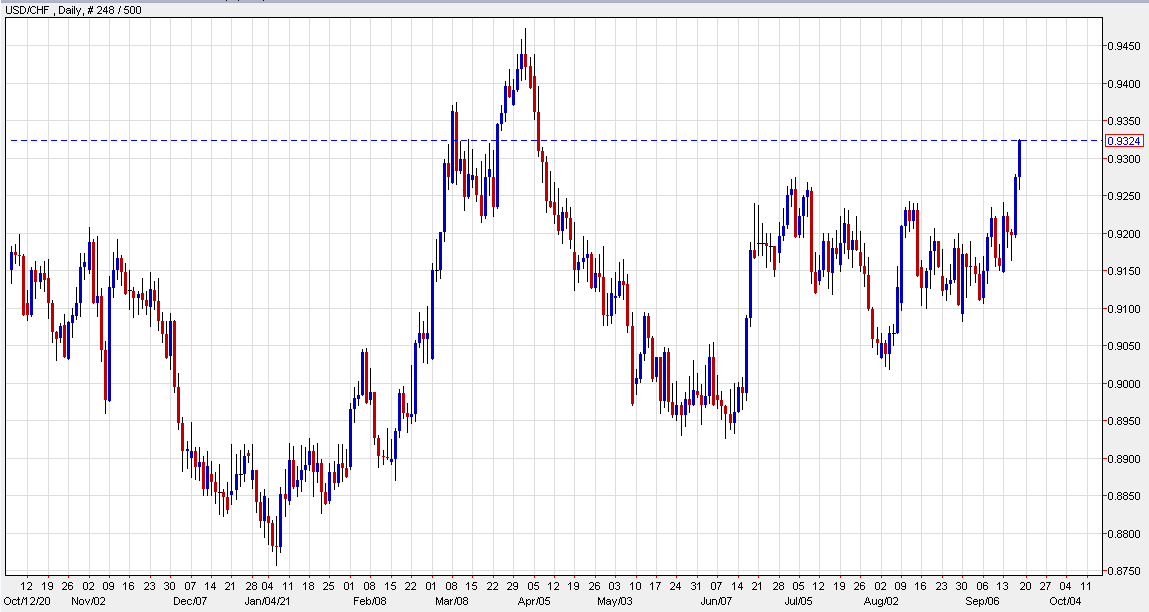 Have a great weekend.

Consumer prices rose 8.5% in July, less than expected as inflation pressures ease a bit
Risk assets put on a brave face as China slows
China releases a whitepaper on the Taiwan situation
Markets in Hibernation as US CPI Awaited
USDCHF returns back toward the 200 hour MA